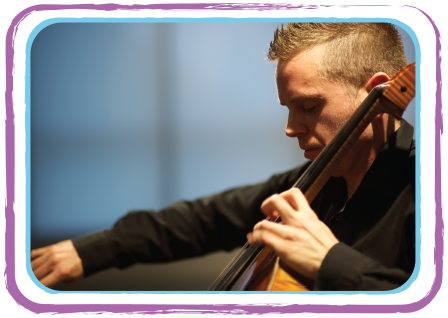 “ravishing sensitivity…one of the highlights of my listening year”

“Gerald Peregrine plays the cello as if born to it”

Gerald Peregrine is an established soloist, chamber and orchestral musician, who regularly performs in Ireland, Europe, the Americas and Asia. He has a diverse range of musical interests, and has gained much critical acclaim as a soloist and chamber musician.

Based in Dublin, Gerald is a member of the critically acclaimed Ensemble Avalon, who have recently completed a 3 year residency as the first ever ensemble in residence at Trinity College Dublin. Their first disc was released on the RTE Lyric fm label to critical acclaim both at home and abroad. The trio undertook their first North American tour in November 2011, performing in Princeton University, Washington Conservatory and New York, and recently performed the Beethoven triple concerto in Belfast and Dublin in April 2014. The trio will curate the summer chamber music series for the NCH in 2015.

As a chamber musician he has performed with international artists such as Patricia Rozario, Barry Douglas, Rosey Chan, Anthony Pleeth, Catherine Leonard. He has given numerous solo recitals in all the major venues in Ireland, as well as at major festivals in Asia and Europe He was the National Concert Hall’s rising star in 2004, and also represented Ireland in the European Young Musician of the Year competition in 1996. He presented several concert series in Dublin featuring the complete works for cello/piano by Bach, Beethoven and Brahms, all recorded and broadcast by RTE Lyric fm.

Gerald is a member of Trio Festivale, who since 2008 have toured Asia extensively, as well as North America. They were guest lecturers at Beijing conservatory in 2012, and have performed on Hong Kong radio and tv. They performed a 2 week tour of the USA in September 2014, their 3rd major tour of the continent, and will return to China/Korea for the 5th time in January 2016. The trio made their Carnegie hall debut in Weill hall in 2010.

Gerald is also an established orchestral performer and is long standing member of Camerata Ireland. touring globally under the direction of Barry Douglas. He has also performed with Cameratino, having performed recently in Dublin, Belfast and Paris. He has performed in major halls in Russia, China, Finland, France, USA, Poland, Portugal, Spain, UK, Holland, Belgium, Italy, South Korea.

He has performed as a chamber musician at festivals in UK, Hong Kong and France.

He has also held the post of co-principal cellist of the Wexford Opera festival orchestra since 2005. Previous orchestral experience includes sub principal RTE Symphony (2003-2005). He is also principal of the Orchestra of Ireland, and has performed with the ICO, Ulster orch and RTE Concert orch.

As a concerto soloist, Gerald has performed with all the major Irish orchestras, and is regularly featured on radio. He released his debut CD in 2007. His new solo CD featuring early 20th century Irish and British composers will be released in spring 2016..

In Feb 2014 he recorded the solo cello score to the upcoming John Boorman film ‘Queen and Country’ accompanied by the RTE National Symphony Orchestra. The film premiered at the Cannes film festival. He has also been a featured soloist on scores for recent film productions by BBC One and Sky One.

He performed live at the 1999 MTV Europe Awards and has also performed chamber recitals for The Queen, Prince Charles and Princess Anne in venues such as Kensington Palace.

From the age of 15 Gerald commuted regularly to London for tuition with William Pleeth O.B.E. He completed his undergraduate studies as a Foundation scholar at the Royal College of Music under Steven Doane. Gerald also holds a hons masters degree from the university of Limerick. He completed his postgraduate studies as a prestigious Fulbright scholar at Indiana University, under Emilio Colon and the late Janos Starker.

He regularly gives primary school music workshops around Ireland with his company the Mobile Music Machine, who have recently partnered with the NCH in Dublin to provide outreach across Ireland.

Gerald recently purchased a rare bow by Eugene Sartory, which was made possible with part funding under the Music Network instrument purchase scheme.